The musical idea is the center and technology is used to give it form: this is the philosophy that inspires us when we create music for images in motion. 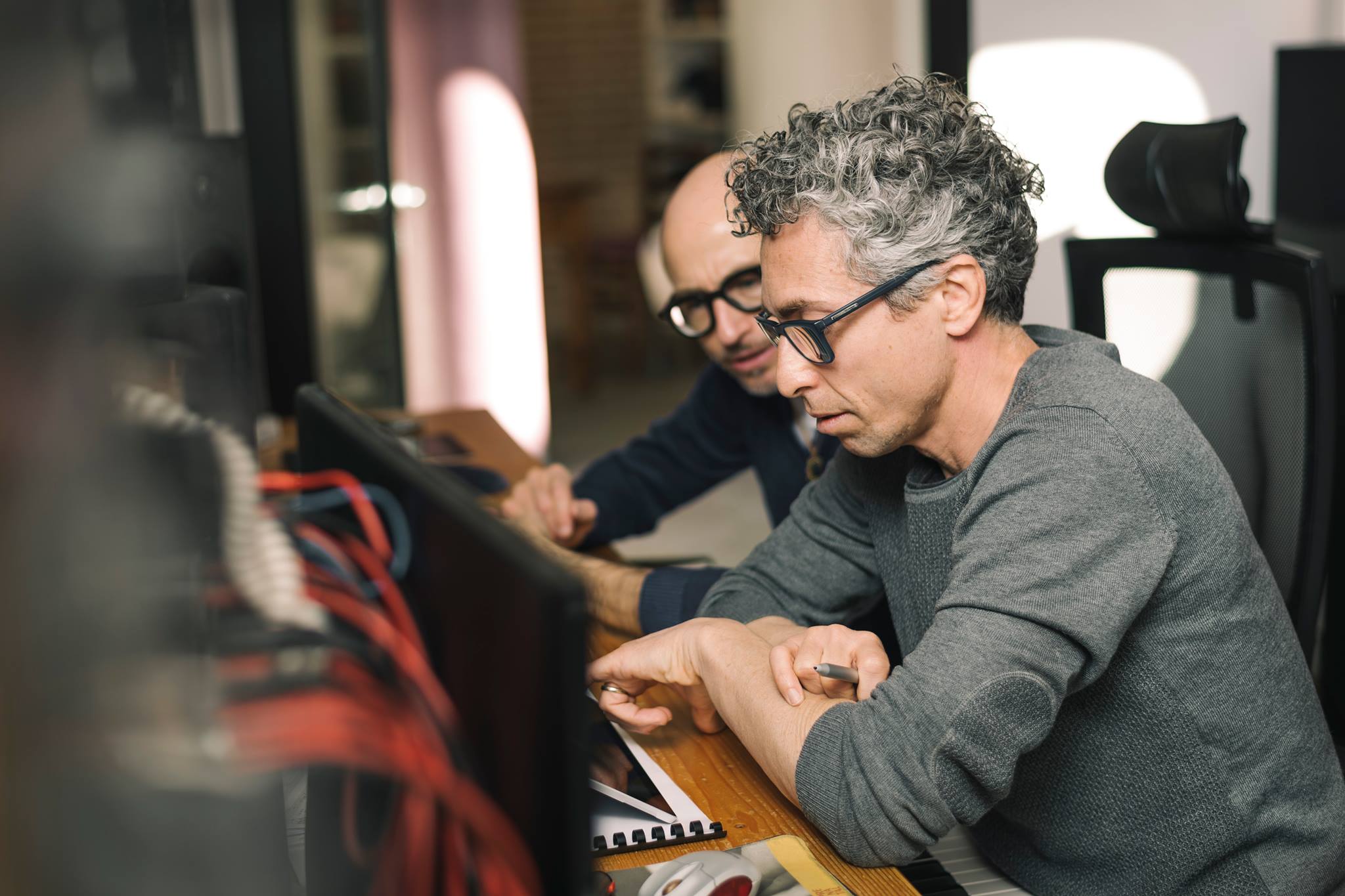 Our deep knowledge of music let us to combine classical instrumentation and orchestration with the most experimental techniques of electronic music: our tailor-made music is chiseled through all phases, from composition and orchestral scoring to surround mixing and mastering.
We record small and large musical ensembles, but we also have developed an original production technique – Real Ensampling ® – that links human, acoustic performances with the best sample libraries, to achieve surprising realism and emotional impact even without recording the London Symphony…
For commercials and corporate, we have in mind all the aspects of each Client’s Sound Branding, and work to research and keep a strong coherency with its audio identity.
With Directors, our approach is to deeply understand their films’ needs, to make the music joined to their essence; to them, we offer a mockup.
For licensing and music supervision services, we have our own music publishing company, plus an extended network with third party Publishers and record Labels. 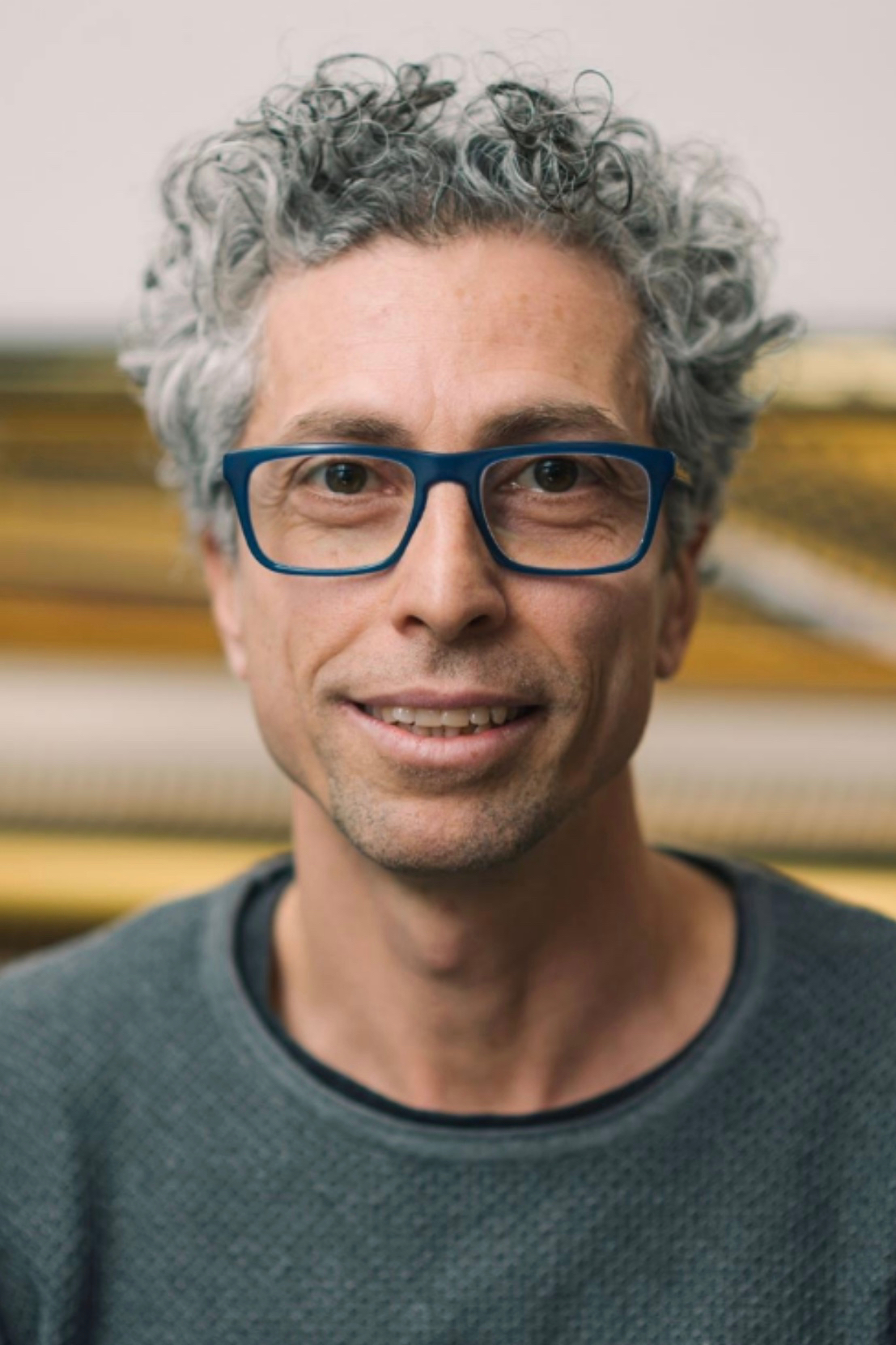 Graduated in Guitar with M° Guido Margaria, in Composition with M° Carlo Mosso and M° Gilberto Bosco and in Electronic Music with M° Ruggero Tajé. He got a degree in Political Science with his thesis on the political implications of music and got a diploma in the Arrangement and Composition course in the “Scuola di Alto Perfezionamento Musicale (APM)” in Saluzzo, where he subsequently came back to teach Composition and Arrangement.

At aged eight he saw an apparition: a winged-guitarist showed him the way. He followed. He got his diploma in guitar, aged twenty, at the Conservatory of Alessandria, studying with Guido Margaria, and in the following five years studied composition with Carlo Mosso, who left a lasting impression on him; in 2000 he got his diploma in Turin, studying with Gilberto Bosco and two years later his diploma in Electronic Music, studying with Ruggero Tajè at the Verdi Conservatory of Milan. In the meantime an unemployed guitarist advised him not to take his mystical ideas too seriously: so, after completing his secondary education in science, he got a degree in Political Science (just to be on the safe side) with his thesis on… the political implications of music. But the heart commands, and after:
– having played in Trademark with his future partner in bottega del suono, Corrado Carosio
– having got his diploma in the Arrangement course in the Scuola di Alto Perfezionamento Musicale in Saluzzo and therefore going back to teach composition and arrangement
– having been a guitar teacher for a few years in state schools, he decided that the moment had come to make the leap…
And at ‘bottega del suono’ the adventure began. 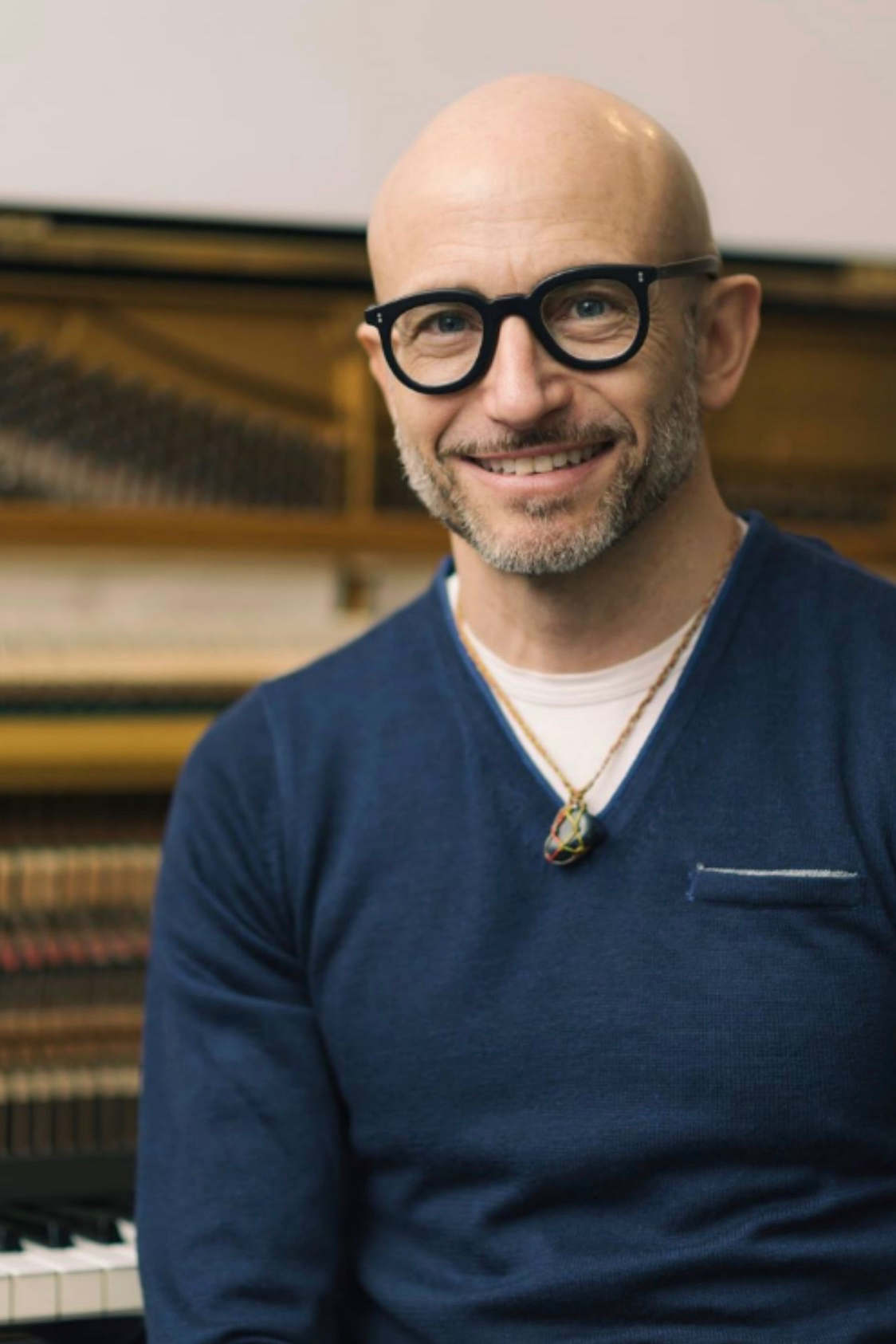 Graduated in Piano with M° Mario Delli Ponti, won the “Laboratorio Canzone” sponsored by Centro Professione Musica (CPM) in Milan, in cooperation with Emi and Warner. Besides, he has succesfully completed the first level in the Composition course at the Conservatory of Alessandria with Paolo Ferrara and attended jazz specialisation courses with Riccardo Zegna at Siena Jazz and with Massimo Colombo at CPM. He has been director of the Brigata Alpina Taurinense choir.

After about 8 years he was abducted, not by Martians, but by the sound of the piano. Here started the idyll that accompanied him to his diploma, which he got in 1988 studying with Mario Delli Ponti at the Conservatory of Alessandria.
Not satisfied, he attended jazz specialisation courses with Riccardo Zegna at Siena Jazz and with Massimo Colombo at the Centro Professione Musica of Milan, where he won the “Laboratorio Canzone” sponsored by EMI and Warner.
In 1993, while studying choir direction, he successfully completed the first level in the Composition course at the “Vivaldi” Conservatory of Alessandria, studying with Paolo Ferrara.
In the meantime, he put together a group called Trademark, with whom he composed many tracks and performed in bars and clubs in Milan. This is how he got to know his fellow Craftsman, Pierangelo Fornaro. Also belonging to the cover band “Aspettando Margot” later revealed itself to be important, both for the quality of its musicians and for the live experience in thousands of nightspots.
On top of all this, he taught the piano for years in state schools, having specialised in teaching, but after a few temporary music teaching positions at middle and elementary schools, a flute in his head clarified his ideas.
And at ‘bottega del suono’ the adventure began.

The artistic collaboration between Carosio and Fornaro started in 1998, when they founded the music production house “Bottega del Suono”, which has done the soundtrack to tv series, feature and short films, commercials and plays.

Carosio and Fornaro have composed and produced the soundtrack to the feature films “Buio” (by E. Rossi), “Banana” (by A. Jublin, original songs), “All the murmurs of the sea” (by F. Brugia), “Never Again as before” (by G. Campiotti), “Hannover” (by F. Vicentini Orgnani) and to the short films “The King of the Island” and “Vudu Dolls” (by R. Della Calce, animation) and “La rosa muta” (by C. Bell).

Their re-interpretation of the song “Beautiful”, for Sony Music Publishing, has become the End Title of the ep. 02/02 of the Netflix series “Orange Is The New Black”. Their OST for the tv series Rai2 “Rocco Schiavone” won in 2017 the “Best Music for Italian TV Fiction Series”, award assigned by ColonneSonore.net. Carosio and Fornaro won the “First Prize” and the “Special Prize M. Pittaluga for the best strings and guitar composition” at the first edition of the International Composing Competition “Lavagnino Giovani” for film scoring. They received the “Best Soundtrack Award” at the 17* Genova Film Festival, with the music composed for the short “Vudu Dolls”.

They say about us... 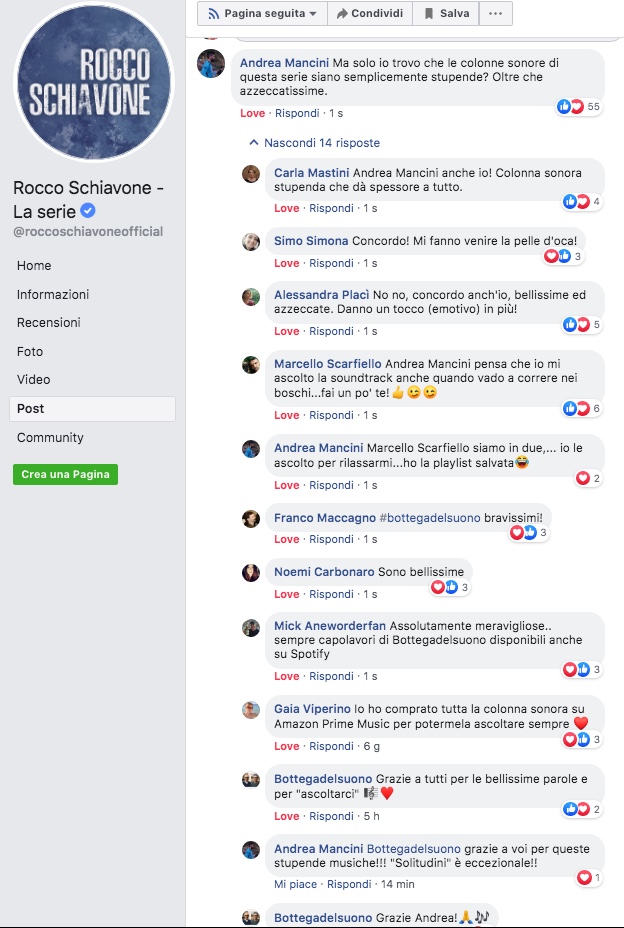 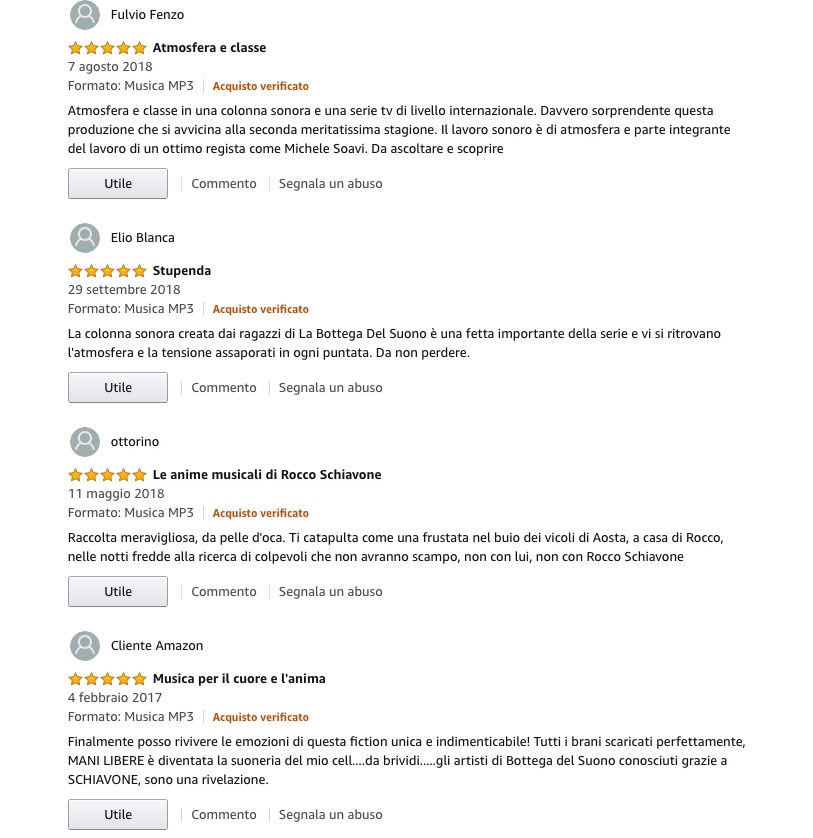 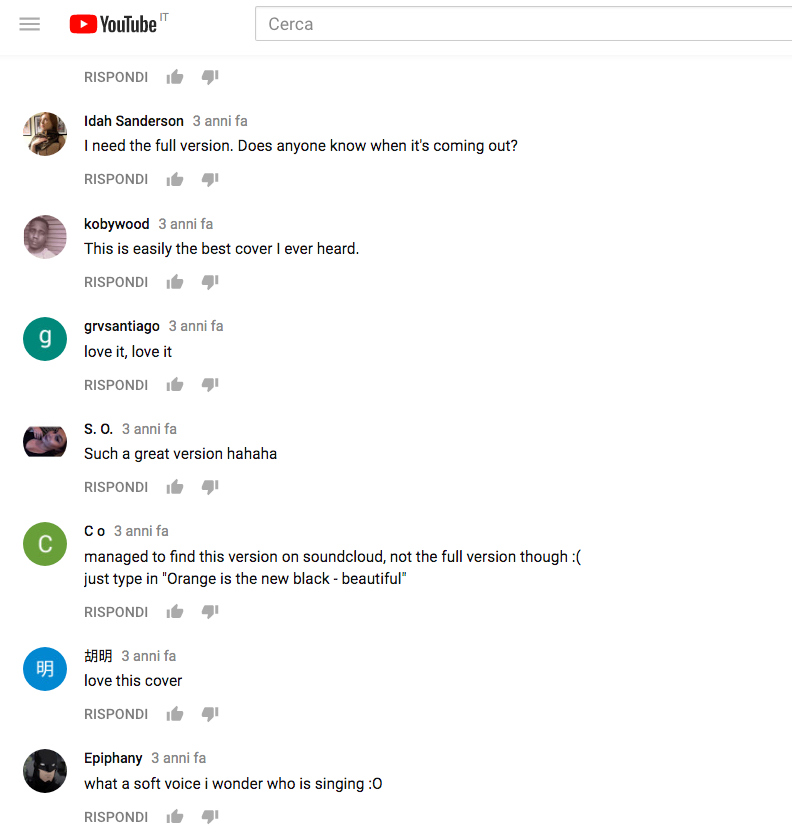